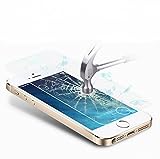 Just like glass, these screen protectors are a revolution in screen protection technology. They are the most optically clear film on the market which allows you to see your LCD screen in full HD. The screen protctors have the lowest light distortion and there is no “Orange Peel Effect”. They are “Smoother than Glass” with such a flat finish that the surface friction is 20% smoother than your actual screen. It is the only screen protector you can buy, that is not only scratch resistant, but also shatter resistant – the film increases the break resistance of your screen by 35%. Ideal for the iPhone 4’s thin glass. This is the only screen protector that will actually reduce the chances of breaking your LCD screen!
•Tempered glass construction for enhanced impact resistance
• Made with chemically treated, transparent tempered glass
•The surface has a hardness of 8-9H, three times stronger than regular PET film. Even sharp objects such as knives and keys will not scratch the surface
•The screen protector has an oleophobic coating that prevents fingerprints and other contaminants which makes the screen protector easy to clean.
•Coated on the back with a strong silicone adhesive that makes installation easy and attaches the screen protector firmly so as to not affect the touch screen’s sensitivity.
•If broken, the screen protector will break into small pieces that are not sharp, making it safer far than other glass products.

1 . We do not accept returns on screen protectors that have been applied or used.

2 . If you do not know the correct procedure for applying a screen protector, please seek professional advise. Returns will not be accepted on ANY used screen protectors with air bubbles, fingerprints or adhesive problems.

This website uses cookies to improve your experience while you navigate through the website. Out of these, the cookies that are categorized as necessary are stored on your browser as they are essential for the working of basic functionalities of the website. We also use third-party cookies that help us analyze and understand how you use this website. These cookies will be stored in your browser only with your consent. You also have the option to opt-out of these cookies. But opting out of some of these cookies may affect your browsing experience.
Necessary Always Enabled

Any cookies that may not be particularly necessary for the website to function and is used specifically to collect user personal data via analytics, ads, other embedded contents are termed as non-necessary cookies. It is mandatory to procure user consent prior to running these cookies on your website.